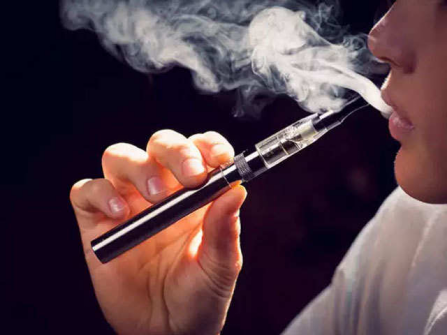 An e-cigarette is a device that may look like a cigarette, a cigar, a pipe, a pen, or a USB drive. The liquid inside may smell fruity, but it can have a high nicotine content. JUUL devices, for example, look like USB drives. They appeared on the U.S. market in 2015 and are now the top-selling brand of e-cigarette in the country. There is concern about young people using JUUL. Refills come in flavors such as cool cucumber, mango, and mint , which may seem natural and harmless, but a single JUUL refill contains as much nicotine as a pack of 20 cigarette.

E-cigarettes are electronic devices that heat a liquid and produce an aerosol, or mix of small particles in the air. E-cigarettes come in many shapes and sizes. Most have a battery, a heating element, and a place to hold a liquid.  E-cigarettes are known by many different names called “e-cigs,” “e-hookahs,” “mods,” “vape pens,” “vapes,” “tank systems,” and “electronic nicotine delivery systems (ENDS).” Using an e-cigarette is sometimes called “vaping.”

7 reasons to avoid e-cigarettes:
Below are seven reasons why e-cigarettes can be harmful:

1. It usually contain nicotine
Most e-cigarettes contain nicotine, which is dangerous because it:
• is habit-forming
• affects brain development, which continues up to the age of about 25 years
• can harm a fetus during pregnancy

2. It contains other toxins
The American Lungs Association list a number of toxins, beyond nicotine, that appear in e-cigarettes are:
• carcinogens, such as acetaldehyde and formaldehyde
• acrolein, a weed killer that can lead to irreversible lung damage
• benzene, a compound in car exhaust
• diacetyl, a chemical linked to bronchiolitis, which is a health condition sometimes called “popcorn lung”
• propylene glycol, used in antifreeze
• hazardous metals, such as lead and cadmium

3. Quitting smoking may be harder
People who switch from traditional cigarettes to e-products may put off getting medical help or trying proven tools that can help with quitting.
A 2016 study found that people who use or have used e-cigarettes are less likely to stop smoking altogether.

4. It cause secondhand smoke
Vaping produces secondhand smoke. Since e-cigarettes often contain the same chemicals as traditional cigarettes, smoke produced by vaping may be toxic to people nearby.

5. It may not deter teen smoking
The marketing of e-cigarettes and their range of flavors can give the impression that vaping is not harmful. This message can tempt people, including teens, to start vaping. However, vaping early on may increase the chances of smoking ordinary cigarettes later in life.

According to a 2017 study , teens who use e-cigarettes are more likely to smoke regular tobacco products later on, compared with their peers.

6. It can harm the brain
In young people, the use of nicotine can impact the reward system in the brain. In time, this can make the use of other drugs, such as cocaine, more pleasurable, according to the National Instituteon drugs Absuse(NIDA).

In addition, nicotine use can affect areas of a young person’s brain that are responsible for attention and learning. It may also increase the risk of developing mood disorders and problems with impulse control.

7. Increase the risk of heart disease

Nicotine causes an increase in blood pressure, heart rate, flow of blood to the heart, and narrowing of the arteries, according to the American Heart Association. It may also contribute to hardening of the arterial walls, or arteriosclerosis, which can play a role in heart attacks.